OTHER BOOKS BY WILLIAM H. SCHABERG

Click here for a “Personal Note” by the Author

A Publication History and Bibliography
The University of Chicago Press, 1995 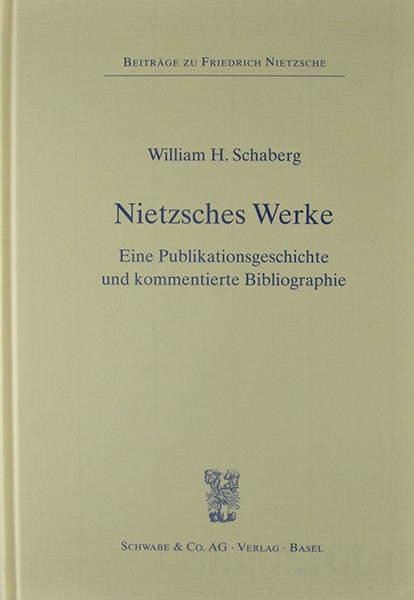 While the praise below is welcome, the most important “review” of this book was
the fact that German scholars insisted it be translated and published in German.

(from the rear dust jacket)
Praise for The Nietzsche Canon:

“The Nietzsche Canon offers a fascinating picture of Nietzsche as an author dealing with his publishers – and in the context of a very different publishing world from today’s. In view of the sometimes obsessive care with which Nietzsche tried to guide his works into print, one has to respect the distinction – so often ignored – between his published and unpublished writings. Schaberg’s account conveys a vivid sense of the effect on Nietzsche of the lamentably meager sales during his lifetime of the books he wrote.”

“This book is a slice of Nietzsche biography that is broad and deep. It should appeal to everyone with an interest in Nietzsche.”

It had not occurred to me that I could actually own one of Nietzsche’s first editions until 1984 when I attended a meeting of the Eastern Division of the American Philosophical Association in New York City. In the book display area, I met an antiquarian bookdealer who had an 1889 copy of Götzen-Dämmerung for sale. Without a moment’s hesitation, I bought it.

I had read Nietzsche for years and consistently found him to be both the most stimulating and the most infuriating of writers. Somehow, he had the profound and amazing ability to mature as I did – Nietzsche at 20 was far different from Nietzsche at 30, at 40 and now at 50 – although this may be more of a commentary on my reading skills than on Nietzsche’s writings. Nonetheless, the original copy of Götzen-Dämmerung fascinated me and I soon discovered that there was an almost physical pleasure to be had from owning a treasure such as this. The book never sat on my shelf for long before I would take it down and examine it carefully. I was delighted to know what it looked like when it first appeared. The original paper cover – with the title printed in bold red ink – was simple yet dramatic. The book itself was elegant with broad margins and a single line encircling each page of text. The back cover listed many of Nietzsche’s other works – available from two different publishers – one of which was a piece of published music! In short, the book was beautiful. It stimulated and pleased me greatly even before I began to consider the most intriguing question of all: “Is it possible that Nietzsche might have held this very copy in his hands?”

This was gratification that far outweighed the price of the book and I resolved to build a collection of Nietzsche’s first editions. I began the search by contacting several rare book dealers but it soon became obvious that I would have to learn much more about Nietzsche’s publication history if I were to continue the pursuit. In one early instance, I was offered a copy of Nietzsche’s first edition, second issue Unzeitgemässe Betrachtungen. Neither the bookseller nor I knew exactly what it was; it was certainly not a first edition but it was just as obviously not a second edition. I bought the book anyway on the presumption that I could sort it out later.

My initial research showed me that there was very little accurate information available in English and it was only after I began to explore Yale University’s Sterling Library that I made any progress at all. In time, the search led me to other universities in the Northeast, to the New York City Public Library and to the Library of Congress. Nietzsche’s books began to take up more and more of my time but the rewards were remarkable and all the while my collection of early editions grew – as did the bibliography and the details of Nietzsche’s publication history.

The Nietzsche Canon: A Publication History and Bibliography [pp. 195-96]